On Wednesday 11th May, the children in Primary 2 entertained their parents and the rest of the school by putting on a French Assembly.  They gave everyone a taster of the French they’ve learned this session by singing songs about greetings, the days of the week and the colours of the rainbow.  They also asked their classmates what their names were in French and how they were feeling.

They even did some Big Maths counting in French!  Well done to everyone in Primary 2 for working so hard on this assembly. 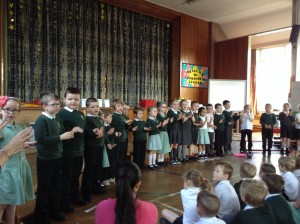