Today, we tried something new in P2!  We used Google Cardboard, which is a virtual reality device.  We got to explore the Natural History museum in New York!  It was very exciting, because we got to see lots of dinosaur skeletons – including a T-Rex!

‘It was like we were teleported into the museum!’ – Ethan

We look forward to using Google Cardboard to explore different things around the world, and even in space! 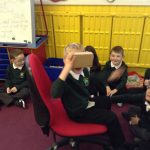